Just added to your cart

Rule Breakers: Muskie on the Fly 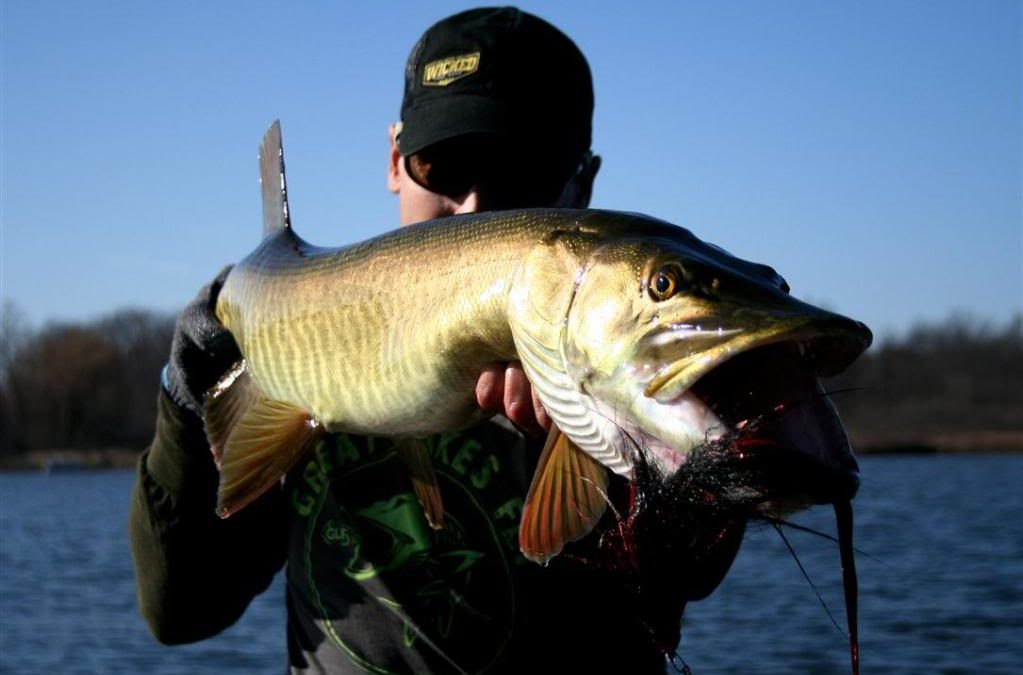 The easiest rule to learn about muskies is:  they often don’t care about the rules.  There are definitely “rules” you can follow to increase the odds of success, though.  And there are a lot of them.  Muskie fisherman are perhaps the most guilty of over analyzing when a fish will eat.  Moonrise, moonset, barometric pressure, cold front, warm front, low light, midday, fish deep, fish weeds, fish big, fish small, fish slow, fish fast, etc. If muskies knew these rules, it would make things a heck of a lot easier.  Unfortunately, muskies do what they want, when they want.  For me, that is one of the biggest draws.  I’m sure I’ll never figure them out…and I love that.

One particular November day will always stand out to me. My younger brother and I met at a local lake on a cool, crisp morning. The weather looked awful for fishing.  Clear blue skies, high barometer, light east wind, and bright sun.  Post front isn’t always a death sentence for muskie activity, but its the type of day that screams for you to stay home and get things done around the house.  Mark and I hadn’t been out in a few weeks, so we planned to go regardless.   The day didn’t start out well with the realization I forgot my rods.  Pretty sure I’ve never done that before.  I think I stared at the back of my truck for a few minutes thinking they would materialize.  No luck.  I informed Mark that I was an idiot, and that I would be back.  I remember driving home and thinking this was a sure sign that we should have just stayed home.

I returned an hour later and was pleasantly surprised Mark had raised a decent fish.  I thought for sure it would be one of those fall days in which a muskie would never show itself.   A short time later, Mark convinces a fish to eat in a well executed figure eight.   Our excitement quickly turns to silence when the line goes slack.  Like muskie often do, violent head shaking leads to freeing the hook from their boney mouth.  It doesn’t take long before the ribbing of blowing our only shot of the day begins.  Some things never die amongst brothers. But to our surprise, we continued to move fish.  Then I see a large, mustard brown figure tracking my fly from below.   She is in the upper 40s range and thick across her back.  A few minutes later I had her up again, but she doesn’t eat.  Still a good sign to see a big female moving.  A short time later as I watch my fly approach the boat, I see a white mouth.  It happens in a split second, but it always seems like slow motion.  A large white mouth appears, and before I can get a word out, the fish is headshaking just below the surface.  “Fish.”   I would say there were a few tense moments, but to be honest, I think that is a given with every decent muskie.  We get the fish in the net and snap a few photos. This would be the first of three fish to the net before the day is over.

We went from thinking it was going to be a day of casting practice, to one fluke eat, that turned into four eats and one big girl raised.   Thats muskie fishing.  They don’t eat on days you swear are perfect, and then get active on days it should be slow.  They are stubborn, unpredictable, and moody…but I love them dearly.

Quick product plug: I absolutely love the Renzetti Saltwater Traveler with the 6×6 pedestal base. The jaws hold hooks up to 8/0 very well, and the large base prevents the vise from tipping when really pulling the thread tight. Since many of the flies I tie have a second hook, I prefer a vise that has some free space behind the jaw. The bent shaft allows the fly to remain straight, giving me a clear view of how it will look as I’m tying.